“Roy Patterson is undoubtedly one of Canada’s leading guitarists……glorious clarity of tone, sophisticated voicings and featherlight fingerwork.” -the Toronto Star

Jacob’s Cattle is the name of the current project led by guitarist/tunesmith Roy Patterson. The band’s hybrid instrumental form of Roots/Americana is highly evocative and reflects a level of artistry that is both sophisticated and emotionally compelling.

The band’s first CD, “Songs From my Father’s House” released in June, 2014, was inspired by the imprints of the music that Roy heard on the radio on a daily basis while growing up in rural Nova Scotia and the music of his teenage years; a steady stream of country music and a diverse hit parade of songs from Hank Williams and Buck Owens, Ray Charles, Harry Belafonte, Petula Clarke, The Ventures and the gamut of artists who defined the popular music of the era.

Although Jacob’s Cattle represents a new/old direction for the guitarist/band leader, it is definitely not his first time out. For roughly three decades Roy was part of the Canadian jazz scene and racked up an impressive list of credits. In 1996 his quartet won 1st prize at the Montreal International Jazz festival (the first Toronto based band to do so) the Jazz Report’s “Guitarist of the Year” award for 2000, performances in Europe, the U.S.A. and Asia. There were numerous Canadian tours in support of six CDs released under his own name and radio and TV appearances including a one hour special for Bravo. Ironically, at a time when he is moving away from the jazz world and returning to a roots-based style, Roy was recently profiled in the Hal Leonard book, “The Great Jazz Guitarists – The Ultimate Guide” authored by Scott Yanow.

For those who might be worried that Jacob’s Cattle is “too jazzy” one need not be concerned. Roy’s earliest playing experiences at all-night blues jams in Nova Scotia as a teenager, dance band tours of Atlantic Canada during the 1970s and the six-nighters on the Queen St. country & western circuit when he first moved to Toronto serve to ground his playing, and with three east coasters and a seasoned pedal steel player the band’s roots run deep. It’s all about carefully crafted tunes, depth and communication.

“Every note that he plays seems to have a purpose and a place, and both purpose and place usually have something to do with melody.”
-The Globe and Mail 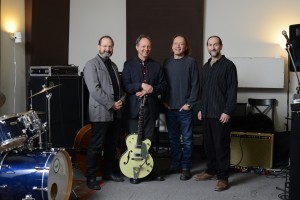